There’s nothing like a pandemic for demonstrating the necessity for serialisation, interoperability, and more advanced analytics and tracking. Tim Gunn asks Rob Handfield, the executive director of the Supply Chain Resource Cooperative at North Carolina State University, Mark Treshock, IBM’s global solution leader for blockchain in healthcare and life sciences, and Shawn Muma, technology research leader for the Digital Supply Chain Institute, what the supply chain might look like once this is all over.

Again and again over the past year, failures to track the spread of SARS-CoV-2 have brought suffering and death. ‘Test and trace’ doesn’t have nearly the same gravity as that grim pair but, before the vaccines, it was the closest thing to an opposite anyone could fashion. Some did it much better than others.

Vaccination, being one of humanity’s signature achievements, carries a bit more imaginative heft, but it won’t remove the need for strong Covid-19 testing regimes for a while yet. In fact, the biggest pharmaceutical supply operation ever undertaken wouldn’t be possible without the same type of thinking – with one slight twist. Whereas test and trace enables authorities to stop the virus by locating and isolating infections, fast and effective vaccine distribution depends on the ability to locate and transfer supplies.

The parallels don’t end there. Test and trace schemes, tied to lockdowns and quarantines, only work when individuals accept limits on their freedom. Similarly, for Mark Treshock, IBM’s global solution leader for blockchain in healthcare and life sciences, and Rob Handfield, the executive director of the Supply Chain Resource Cooperative at North Carolina State University, distributing vaccines means expanding the definition of a public utility.

Handfield’s utilities are the vaccines themselves. At the Covid-19 vaccine manufacturing summit hosted by Chatham House in March 2021, he proposed building a global visibility system that could provide the key information on supply and demand to a third-party adjudicator or control tower like the WTO. This would act as a “traffic cop”, directing flows of materials to and from different parts of the world, depending on their requirements and manufacturing capacities. “People have to think more holistically,” he explains. “The vaccine should be a utility. It’s not a matter of competitive advantage anymore, or intellectual property. This vaccine is here to stay, and unless we are able to get it out to every country in the world quickly, we’re going to continue to get variants and we’re going to continue to have shortfalls.”

On the other side, a global visibility system would help drug companies avoid the overproduction issues that have left PPE suppliers with mountains of excess stock. Even so, Handfield fears that private companies are unlikely to share information on their inventory and production, much less give a third party the authority to manage where and how they ship their products. Enter Treshock. Through its work on FDA blockchain pilots, which were based on its Food Trust platform, IBM believes it has developed an understanding of how to make track and trace technologies work at scale across the pharmaceutical supply chain. Unlike the food industry, which is anchored by major retailers, pharma is a balance of manufacturers, distributors and dispensers, none of which have quite the sway Walmart or Carrefour does on the movement of foodstuffs. So, IBM stepped back, reconsidered, and turned their track and trace technology into an open-source utility.

“There was great concern that the industry would just turn over the keys to its data or its responsibility to a third-party vendor,” explains Treshock. “That’s one of the challenges you see in commercial solutions for Drug Supply Chain Security Act interoperability – at the end of the day, nobody is really willing to give any one technology company the ability to do it all.” With pharmaceutical knowledge from Merck and open source expertise from the Linux Foundation, IBM is now working on the track and trace technology being used for the US vaccine supply, as well as the public-facing Health Pass blockchain for recording vaccinations – which can tie individual recipients to specific product batches and distribution routes.

“The ability to share this data, to interoperate across the global supply chain, should be a utility, very much like an interstate highway or the global airport system.” Treshock continues. “Federal Express and UPS compete against each other vehemently, but they both use the same roads. The alternative is that they’d each build their own roads, which sounds absurd – but it’s what we’re doing in the data world in general and specifically in life sciences. We rely on these point-to-point connections that we’ve reached our ability to scale. With this road network operating as a not-for-profit entity, participants, potentially competitors, could utilise it without fear of enriching each other.”

The pandemic has gone a long way to breaking the binary opposition of competition and collaboration. Speaking at the IFPMA media briefing on Covid-19 vaccine manufacturing on 23rd April 2021, Roger Connor, president for global vaccines at GlaxoSmithKline and the vaccine CEO representative for Covax, highlighted the work of the Covax manufacturing task force. “These are very complicated products,” he said. “There are hundreds of components and it only takes one of them to be constrained or stopped flowing to bring the supply of the overall vaccine to a halt. We are very keen to get behind the proposals from the task force, which are to continue to look for collaboration, ensuring the free flow of goods, and getting ahead of bottlenecks; monitoring supply and demand to see where the next one is coming and act on it now, rather than reacting to it.”

Indeed, when GSK’s vaccine development stalled, its manufacturing arm offered its services to the companies that had beaten GSK to market. It’s not the pharmaceutical industry of 2019 anymore. “If there’s an opportunity for one company to make their capacity available to another, we will do exactly that,” Connor said. “That behaviour is the sort of thing that we’re seeing across the world.” These are still point-to-point connections between companies, so their efficiency is limited, but the willingness to share is unprecedented.

According to Shawn Muma, technology research leader for the Digital Supply Chain Institute, the mantra is: ‘don’t waste a good pandemic’. “Enterprise walls are coming down and businesses are looking horizontally across the entire supply chain, versus vertically, as they did in the past,” he says.

The best model Handfield’s seen for this is Flex’s ‘Pulse’ global visibility system, which makes it possible for the electronics manufacturer to monitor inventory across its global supply chains instantaneously. The technology, a set of modules that extract and standardise specific data feeds so they can be viewed on a single global dashboard, is simple; convincing companies to use it could be another matter.

That said, the attention the Flex system requires companies to devote to assessing their data could help. In Muma’s experience, most businesses are yet to develop a set of data standards, let alone establish a process for identifying and approving what they’re willing to share. Paradoxically, information is being hoarded because of ignorance. He breaks a solution down into three general categories: companies need to sort the data that actually gives them a competitive advantage from the data that might be beneficial to share, though it sits in a grey area, and the data that should be shared because external actors can use it to help improve efficiencies.

“Over time,” he adds, “people realise that a lot of the stuff they put in the protected bucket can in fact be shared without a lot of risk and that they can generate ROI by doing so.”

A lot more than ROI is at stake in the vaccine rollout and in the future model of personalised healthcare, where the raw materials for therapies will be sourced from patients. “In that world,” says Treshock, “we become our own supply chain. Today it’s all about scale, and in that model, companies typically create moats around themselves using information to support their competitive advantage. For personalised medicine, it will be necessary to fluidly share information, because these samples need to be temperature controlled both ways and if there’s a mix up in the final treatment, the consequences will be grievous.” Soon, there could be millions of these shipments travelling on literal and virtual roads. The world has spent the past year practising for them. As much as the treatments, it’s the system for tracking and tracing them that will keep people healthy. 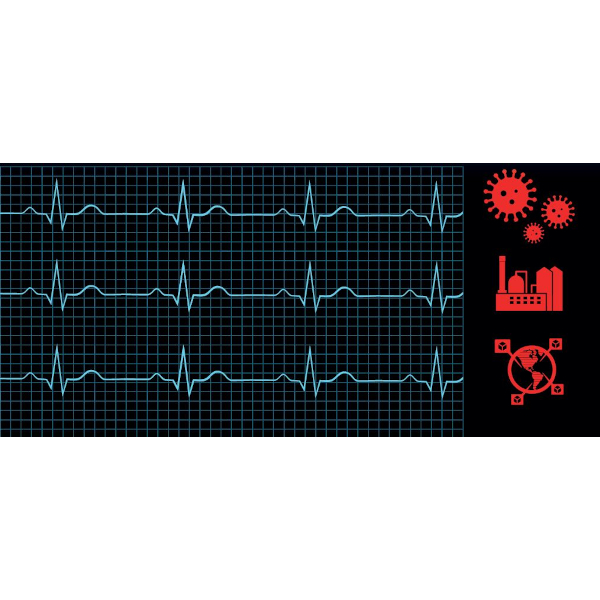