Change with the times 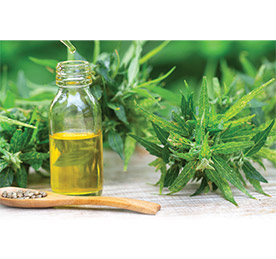 With medicinal cannabis increasingly being legalised worldwide, there are more companies interested in developing these products. However, unlike traditional pharma drugs, medicinal cannabis has unique challenges due to the characteristics of the material, as well as the complex and continually evolving regulatory environment.

There is a huge range of products that fall under the category of medicinal cannabis. The key distinction is between plant-derived cannabinoids (phytocannabinoids) and cannabinoid molecules that are synthetically produced.

Plant-derived products can be raw cannabis plant material that has been produced in a strict GMP-compliant environment from cloned plants that allow for predictable cannabinoid content. These would be either vaporised or smoked by the user.

Other plant-derived products are in liquid form, such as oils or tinctures, which are made by extracting cannabinoids from plant material by exposing them to solvents like ethanol or supercritical carbon dioxide. The liquid is usually swallowed or put under the tongue using a dropper.

Other extracts can be made into gels to be applied directly to the skin. There are also concentrated plant extracts that are put into capsules that are swallowed similarly to other pharmaceuticals.

Plant-derived products vary in their level of phytocannabinoids, of which tetrahydrocannabinol (THC) and cannabidiol (CBD) are considered the most important. These products can be developed with mostly THC or CBD or a combination of both. These typically contain smaller amounts of cannabinoids, terpenoids, flavonoids and plant compounds.

Whole (sometimes referred to as ‘full-spectrum’) products are produced in a method that preserves the balance of all the different cannabinoids and terpenoids. Other extracts are filtered and manufactured in a way that maximises the presence of one particular cannabinoid, such as CBD.

Although research is still emerging in this area, there is a widespread belief among scientists that the therapeutic benefits of cannabinoids, such as CBD, are optimised when taken in a whole product, which is often called ‘the entourage effect’.

Cannabinoids such as THC and CBD can also be produced in a laboratory using organic chemistry approaches. The cannabinoid molecules produced in this way are identical to those found in the plant. This is closer to a traditional ‘pharma’ approach to cannabinoid production and avoids the potential for issues such as seasonal variation in using plant-derived materials. However, there is concern that due to the lack of ‘entourage’ in these products that they are inferior to those that are plant-derived.

As well as the wide variety of products available, there are also many types of packaging, several of which are already popular in the pharma industry. “The standard push-and-twist amber pill bottle ubiquitous in the pharmaceutical industry is still a popular format for medical cannabis packaging, as branding and shelf appeal are less of a concern,” says Sean Riley, senior director, media and industry communications, PMMI, the association for packaging and processing technologies. “Peel-and-push blisters have also proved to be a ready-made packaging solution for the medical cannabis market, as they have already been designed to meet requirements for child-resistant packaging.”

The type of product is the primary factor in determining the packaging used. “From dried flower to sublingual tongue strips, cannabis is now available in a staggering variety of formats, each with its preferred packaging style,” Riley explains. “Dried flower is most commonly placed by hand into a plastic jar with a child-resistant lid, be it screw-top or push-top. For concentrates, small cups are preferred for packaging.”

Cannabis creams, balms and salves tend to be packaged in either plastic or glass child-resistant jars, with secondary packaging consisting of a paperboard box. Flexible tubes are also popular for these formats, particularly in the retail setting for CBD products.

There are major cost implications of different options, however. “While effective, these blisters are more expensive per unit and require investing in a machine capable of producing them or the use of a contract packager,” says Riley.

The range of choices can be overwhelming for companies to navigate. “They struggle with the wide variety of packaging options and packaging types,” says Riley. “Packaging format choices must also be considered in conjunction with required labelling regulations, which can also be different for each market that cannabis is legal.”

Increasing concerns about sustainability are also driving packaging decisions. “While more colourful and premium styles of bottle packaging have seen use in the medical cannabis market, there is growing concern about the environmental impact of plastic bottles in general,” says Riley. “As a result, many medical cannabis packagers are exploring environmentally friendly flexible pouches and bags.”

The sensitivity of the products is an additional factor to consider in packaging decisions. “CBD or other cannabinoids are temperature-sensitive, light-sensitive and heat-sensitive," says Bhatarah.

“If people are taking appropriate care with establishing the shelf life, they need to generate the appropriate evidence to say that they are confident that their packaging is correct and what they’re saying on the bottle is actually present in the material until the end of the shelf life.”

Generating such data is difficult, however, due to the high costs involved. “If you’re a large pharmaceutical company, the money’s available to do all that work,” explains Bhatarah. “However, if you are a small CBD retailer, you don’t have the opportunity because you don’t have that big of a budget.”

Working cooperatively can be beneficial. “To have greater recognition and harmonisation, companies need to collaborate to unravel important issues and that’s what we are trying to do at the CMC,” says Bhatarah. “We’re trying to bring companies together and share the cost of generating the data needed.”

The lack of traditional players is affecting the willingness to produce evidence for these products and their packaging. “In the pharmaceutical world, people automatically work to produce evidence-based data for their products,” explains Bhatarah. “But with cannabis products, people are getting away with things because it’s not enforced.”

Action needs to be taken to drive progress. “One of the biggest challenges when it comes to equipment is educating cannabis packagers about what their options are,” explains Riley. “While cannabis companies are aware that manual processes are cumbersome and labour-intensive, they often do not know what automation and machine solutions are available to them.”

The lack of knowledge means that companies are relying on external parties to fill in the gaps. “Cannabis producers are typically less familiar with automation applications in general, especially those needed for processes in the cannabis industry that don’t yet have a machine or automation option previously used as a solution,” explains Riley. “This means that cannabis companies rely heavily on OEMs for suggestions and advice.”

As the medicinal cannabis industry is a new one, there is a lot of potential for innovation from both manufacturers and packaging suppliers. This doesn’t mean that processes and technologies that work well in other industries are necessarily applicable, however. “While machines and processes can be adapted from other, similar industries to a certain extent, at the end of the day cannabis is a unique industry with its own set of operational requirements and goals,” says Riley. “More than anything else, it is essential to have machines that are flexible and can adapt to the evolving nature of cannabis packaging.”

Medicinal use of cannabis-based products and cannabinoids