Since 1997, pharma has been looking at additive manufacturing (3D printing), trying to understand what role it will play. Its value is clear, but to pinpoint where it should be used best still remains a challenge. Andrew Tunnicliffe speaks with Professor Clive Roberts, head of the School of Pharmacy at the University of Nottingham, and explores the possibilities.

When it was announced that MIT Professor Michael J Cima and several colleagues were working on a technology that represented “a new way of formulating drugs with unprecedented dosage control”, it was likely not envisaged that, more than 22 years later, it was still finding a significant place in pharma. The team at the Department of Materials Science and Engineering used 3D printing to construct tablets using pharmaceutical-grade materials.

Today, the industry is still looking at how best to deploy that technology in any meaningful way. Of course, there have been successes; in 2015 Aprecia Pharmaceuticals became the first company to be awarded US FDA approval to produce a 3D-printed pharmaceutical. Spritam, a reformulated antiepileptic medication, has a porous structure, which means it dissolves and delivers a very high dose within a few seconds of being in contact with saliva. This helps to address dysphagia among patients, particularly the young and old.

“If you look at the way medicines are now being distributed, there’s a clear shift away from going to your local pharmacy.”

However, despite much investment in R&D, the manufacturing process arguably remains on the threshold of something big in pharma, with great promise but not the mass application Cima and the team likely believed it would achieve. In medicine more generally, however, the technology has already gained a significant foothold by being used to develop implantable medical devices and now, increasingly, in dentistry.

“The Aprecia story is an interesting case study,” says Professor Clive Roberts. “As anyone should in this kind of sector, what you really need to start with is a clinical problem and what would be a good formulation, dosage solution for that. What makes the Aprecia product interesting is that the process of manufacturing they used gets them a tablet that dissolves very quickly in minimal liquid. That would not be possible to achieve using standard fast-melt approaches. So there’s a good reason why you would adopt that technology to make that product; it gives you a certain clinical outcome.”

Roberts is head of the School of Pharmacy at the University of Nottingham. With a background in pharmacy over the past three decades that covered, among other things, formulations, new medicines and biomedical devices. “I would say 3D printing, at the moment, is at the stage where a lot of people have shown that you can make many different types of dosage forms,” says Roberts. “But the real question is, what is the clinical need and business need?”

It is a fair question given the nature of additive manufacture, where the cost of production is not determined by the size of the production line. Roberts says, unlike more traditional Western manufacturing processes, where the cost per unit falls as you scale up, 3D printing costs remain essentially the same whether it is one or 1,000 units produced. It is largely for that reason, Roberts believes, the future of mass additive manufacturing, in pharma at least, is a long way off. “It certainly won’t become the norm for standard medicines,” says Roberts. “There’s no obvious clinical reason for why that would be needed.”

However, it seems it does have a future, evident in the investment from the likes of GlaxoSmithKline (GSK). The global powerhouse has had a leading role in the development of 3D printing strategies for some time, investing heavily in research looking at how it can utilise the process to support future innovations. As far back as 2016, the company’s director of technology, Martin Wallace, had acknowledged the mass manufacture challenges presented by additive technologies. “Current technology allows us to produce up to 1.6 million tablets per hour,” Wallace told Redshift. “You’re going to need a lot of printers to achieve that sort of production.”

GSK, therefore, is more focused on the other ways it can use additive manufacturing, including R&D for new drugs and digital compounding, an area that has big potential. “There are some significant advantages if 3D printing was used in clinical trials,” Roberts explains.

Much of the heavy work carried out by a compounding pharmacist could be done by an additive process, eliminating the need to hand produce numerous iterations of a trial drug. “It is essentially just using another tool to compound so I don’t see any blocking issues,” says Roberts.

The advantages of additive manufacturing in the clinical trial setting do not stop there. It could also help speed up the process, allowing drug companies to produce small amounts of the same drug easily and quickly, responding to reported outcomes more efficiently by altering compounds or changing them altogether. “I think in terms of application and where we’ll see it emerge first,” says Roberts,

“It is almost certainly going to be in clinical trials manufacturing, where compounding pharmacists could run 3D printers in a small manufacturing facility to make dosage forms in the hundreds or thousands.”

This proposition highlights another area where additive manufacturing could bring significant benefits, for both the pharmaceutical and healthcare sectors. The ability to produce unique and tailored dosage forms in smaller runs makes it attractive to pharma – as well as clinicians and patients – by offering the potential to personalise medicines to an individual’s needs.

However, it is important to distinguish between possibility and optimality. “All these things are, to be honest, technically not that difficult to achieve,” says Roberts. “It’s a question of whether there’s actually a clinical need for such personalisation.”

Perhaps, however, the more exciting and potentially revolutionary suggestion is distributed manufacturing. Having the ability to manufacture medications away from a centralised facility is a real possibility thanks to 3D printers. Roberts says it is easy to imagine a printer in a pharmacy and even in a patient’s home, producing tablets. “That kind of idea is essentially digital compounding,” says Roberts. “So a compounding pharmacist or pharmacist who’s able to make medicines could use a 3D printer to make a medicine closer to the patient.”

Labelling it the ‘Amazonisation’ of medication delivery, this is already starting to occur, albeit at a low level. “If you look at the way medicines are now being distributed, there’s a clear shift away from going to your local pharmacy,” says Roberts. “People are consulting health professionals and ordering things online. In the long term, as the technology matures, it’s not unreasonable to think about having some kind of 3D printer, not under control of the clinician, but in people’s houses or pharmacies. Why not?”

Such a method of delivery has real benefit, not only for efficiency but for personalised healthcare. If this is to happen, regulators need to address the challenge of allowing decentralised production in a safe way, something that currently doesn’t exist.

This is not insurmountable, however. “Over time pressure will start to influence the regulatory environment,” Roberts explains. “Regulations change, it takes a long time but they do shift,” says Roberts.

“What makes the Aprecia product interesting is that the process of manufacturing they used gets them a tablet that dissolves very quickly in minimal liquid. That would not be possible to achieve using standard fast-melt approaches.”

At present, the industry is going through what Roberts terms “that normal cycle”, where there is a lot of interest but little action.

1.6 million
Current technology allows for production of more than one million tablets per hour.
GSK

“The reality of actually producing products that make money is going to bite,” warns Roberts. “Then there’s consolidation, when people think ‘okay, can we do something that’s more transformative to the industry rather than just looking at niche areas?’”

Additive manufacturing is not going away anytime soon but pharma is not going to be revolutionised overnight. It has huge potential, particularly in clinical trials and personalised care, but identifying a clinical need and business is essential in order for real progress to happen.

Solvent inkjet printing has been used to 3D print free-standing tablets from a water-based formulation. Using water-soluble PVP ink-based and thiamine HCl as a model API, a printable ink was developed using polysorbate 20 and glycerol as additives. Appropriate surface tension and viscosity values were measured and optimum print parameters were investigated.

Through the initial printing of up to 10 layers, it was observed that two phase separation processes occur: one as a function of time and the other related to the number of layers printed. Optical microscopy imaging show the thiamine HCl crystals exist as a suspension in PVP. Combustion analysis confirmed the successful translation of the composition of the ink into the printed tablet, which contained thiamine HCl in the ideal NSH polymorphic form distributed uniformly throughout the formulation.

Given the high solubility of the API and polymer excipient, drug release was rapid to such an extent that it was not possible to control it by varying the 2D pattern and number of layers. However, this process used no toxic materials, did not need extreme conditions (for example, high temperatures), nor used secondary printing methods to produce a wholly inkjet-printed tablet, without incorporating an edible substrate that would require cutting and encapsulation. The ink formulated in this investigation can potentially be used as a ‘universal’ pharmaceutical formulation for any water soluble API. Investigation of the tablet’s mechanical properties (such as hardness and friability) should be conducted to better characterise the handling and physical integrity of the tablets. 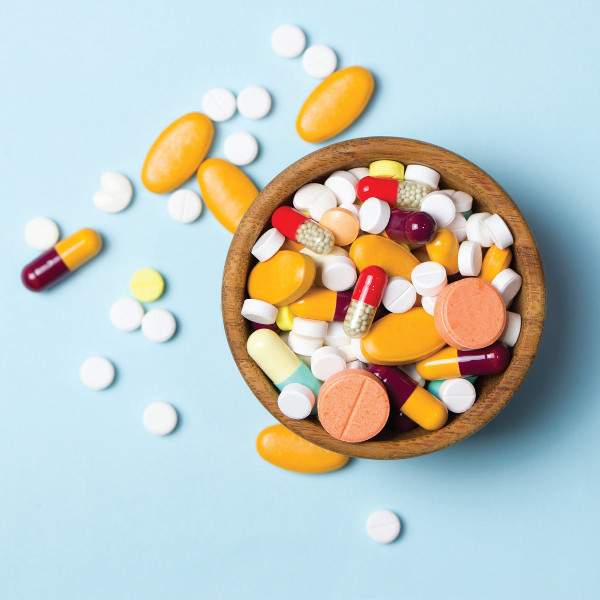 Using pharmaceuticalgrade materials, 3D printing can be used to construct tablets.
Post to: