Globalisation has led to clinical trials being conducted in numerous countries across the globe. This movement has primarily been caused by a need for varied patient population data for differing registrations and by issues in patient recruitment in established clinical research countries.

Many believe the era of globalisation is dead and that we are moving to an era of nation states. However, in the connected medical research world, it is clear that cooperation between countries and research at a pan-national, regional or global level will still continue.

This is the era of the global trial, with most companies conducting multinational trials. Historically, the supply of comparator or reference drugs to clinical trials has either been arranged from the dominant home market of the sponsor, usually the US, or through the hospitals themselves. The rise of the global trial has thrown up a series of new challenges and opportunities for sponsors and CROs to consider:

The expansion of trials into treatment-naive patient populations has continued apace in the past 10-15 years. The expansion into Russia and Eastern Europe has been well documented and discussed but, in recent years, the expansion has continued not only to BRIC(K) countries - Brazil, Russia, India, China and Korea - but also to other South-East Asian countries and Latin America in particular. This expansion of countries where drugs need to be distributed can be seen in the large number of countries that Durbin has serviced within the past few years.

Each of these countries has their own - sometimes, peculiar - customs regulations and companies are increasingly outsourcing distribution to specialist companies. The added expertise that these companies contribute allows the sponsor to more effectively concentrate on the management of the trial. In particular, a history of distribution to these new countries leading to extensive experience and knowledge of the regulations is vital expertise that the outsourcing company can bring.

The trial may be global but pricing of pharmaceutical is far from it. The globalisation of trials, especially those that use blinded comparators, can present sponsors with attractive cost savings if they can procure from cheaper markets. If a sponsor can use a procurement strategy sourcing the comparator drug from a cheaper country, then savings of upwards of 20% can be enjoyed on this extensive budget line.

A detailed knowledge of the differing procurement regulations and supply chains of the various countries and innovator companies is needed. To allow the use of a single batch drug across multiple jurisdictions, the sponsor must be able to convince the respective authorities that the drug is equivalent to the home-marketed product. This process can be extensive and is outside the remit of this article. The trend over the previous years has been to use the smallest number of sourcing countries per trial. While it would be ideal to use a single source across all trial sites, the common approach has become using a single US source for North America and an EU source for the rest of the world.

In 1964, Bob Dylan sang, "The times they are a-changing"; this rings just as true in 2017. As Europe navigates its way towards new arrangements and the US plots a new course, all parties in clinical research and, especially, the procurement of comparators need to be aware of possible changes. Sponsors need to have strong risk-mitigation plans in place. The primary way to ensure that the sponsor can benefit from changes and minimise risk is to use partners that have a strong global base. 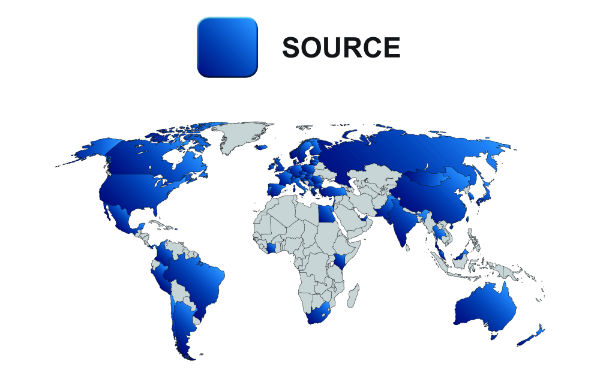 Durbin’s sourcing network is composed of over 1,400 audited and regulatory-complaint suppliers spread across over 65 countries.