The pharmaceutical industry sets high standards in hygiene, quality and performance, and these standards apply to pharmaceutical packing facilities too. Space is also often at a premium in production plants and new additions to the machinery stock must be as compact as possible. Robotronic specialises in robot-aided handling systems that meet these strict size requirements. The Swiss company works with a modular robot cell developed in house, termed modular robot technology or MRT. Only Mitsubishi Electric robots are used in this system.

Robotronic has developed a handling module for supplying ready-to-use syringes to the final packing facility of an international pharmaceutical company in Germany, which was urgently seeking a flexible solution that could be implemented in a maximum construction period of four to five months. The space was tight at 3m², and a supply rate of 400 syringes a minute was stipulated. The solution needed to allow switching between different syringe carriers and syringe formats ranging from 0.5 to 10ml.

Using the modular principle, Robotronic is able to combine any Mitsubishi Electric robots in a cell with other elements such as conveyor belts, camera systems or linear axes. Mike Weber, managing director of Robotronic, says: "We can save a lot of time in design and construction using the modular principle. The basic framework is always present and only has to be fitted out according to the requirements, which keeps procurement costs relatively low. The extremely compact design is an important advantage, enabling us to work in a very small space."

The basic module of the MRT occupies an area that is barely the size of a euro pallet, measuring 1.0 × 1.3m, and is about 2.2m tall.

Two types of MELFA RV-4FL robots from Mitsubishi Electric are used in the syringe handling solution. These are compact overhead articulated-arm robots with six axes. No other mechanical elements such as lifting or rotating components are required. Weber says: "We attach importance to using only robots where possible and only using additional mechanical elements, which may be susceptible to malfunctions, in exceptional cases. A robot usually operates for years without any problems, thereby ensuring a high output of our MRTs."

Incorporated into the custom solution are two Melfa robots of type RV-4FLM-Q1-S15, the related CPUs Q172DRCPU and a PLC CPU type Q03UDECPU. The rotary turret is driven by a Mitsubishi Electric MR-J4 servo motor with motion CPU Q172DCPU. All CPUs form part of the iQ Platform, a multi-CPU platform from Mitsubishi Electric. The robots are suspended overhead and work in pairs.

The two Melfa robots handle tubs, carriers - nests or combs - and the different syringe formats, and are precisely coordinated for this purpose. The sequence for combs, in which the syringes are suspended behind one another in several rows, is that robot A removes a tub from the first turret shaft and places it in the station provided. Robot B removes the comb and robot A returns the empty tub to the rotary turret. Robot B transports the comb to the emptying rail, tilts it and clocks the syringes through. The syringes enter the normal packing process from the rail. Robot B deposits the empty comb in a separate station, where it is picked up by robot A and placed in the tub in the second turret shaft.

The current MRT model can achieve a cycle rate of 400 syringes a minute placed into the emptying rail, but this solution can process up to 600 units a minute. To achieve this, a further axis was added to the system, driven by a Mitsubishi Electric servo motor MR-J4. 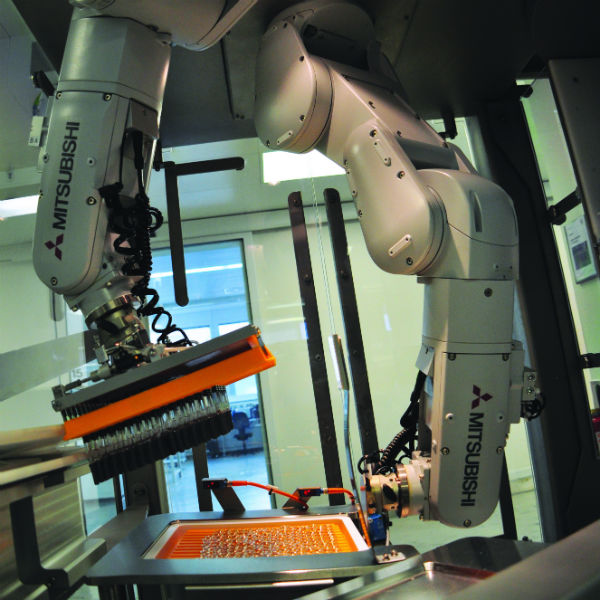 The special feature is that the robots are not only suspended overhead, but also work in pairs in minimal space.